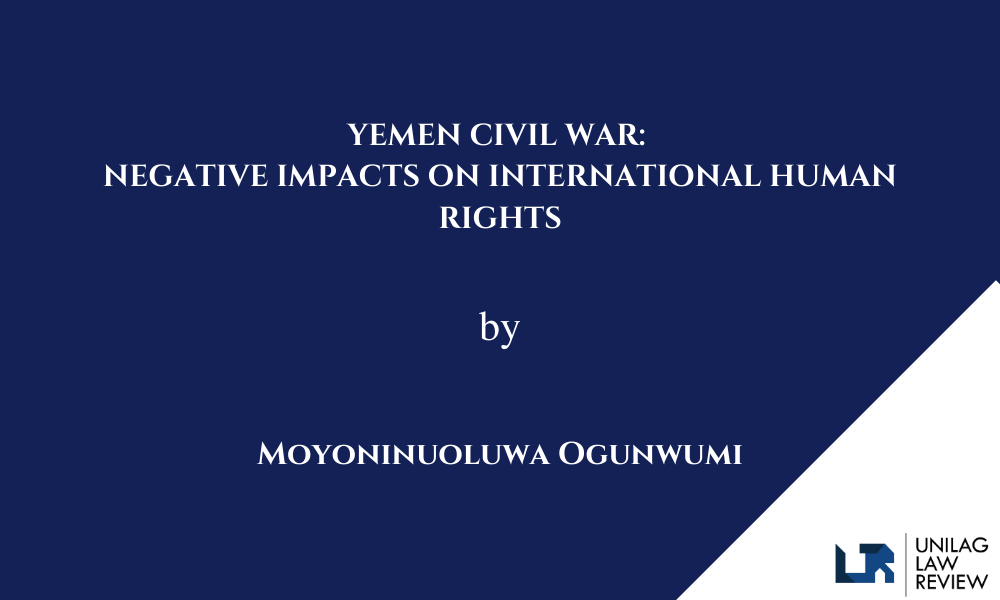 Yemen is a country located at the Southern end of the Arabian Peninsula with its capital in Sana’a. As a result of the numerous humanitarian crises the country faces, ranging from abject poverty to unemployment, it is one of the least developed countries in the world. A large number of the citizens of Yemen are in need of humanitarian assistance.[1] Recently, the country has been overwhelmed by an endless war between the government, led by Abdrabbuh Mansour Hadi and the Houthis movement (an armed group in the Northern part of Yemen). The parties to the conflict are after the administration of Yemen. The Civil War has been on-going for about five years and it does not appear to break off anytime soon as confirmed by Amnesty International, ”there is no end in sight.”[2]

2.0 HOW THE CIVIL WAR STARTED

In 2011, the former president of Yemen, Ali Abdullah Saleh, was hurled out of power, as a result of the Yemeni uprising which was supported by the Houthi armed forces, after ruling for thirty-three consecutive years. The Yemeni uprising began as a peaceful movement against unemployment, poverty, corruption, and the government’s proposal to amend the first Yemeni Constitution. The serene revolt shortly escalated into a full-scale riot and there was a demand for the resignation of the then president. Subsequent to Saleh’s removal from office, President Abdrabbuh Mansour Hadi was elected in a sole presidency election on February 21, 2012. He was assigned a two-year transitional period which was extended for another year in January 2014.

On 25 January 2015, the Houthi armed forces seized political power from Hadi and placed him on house arrest. A pro-Houthi media outlet alleged that Hadi stayed in office even after the expiration of his mandate. Therefore, he was made to sign his resignation. However, in March 2015, Hadi ran off to his hometown, Aden, revoked the resignation, and denounced the Houthi takeover. He then went to Riyadh, the capital of Saudi Arabia, and requested assistance. A coalition of nine countries led by Saudi Arabia intervened in Hadi’s favour since he was the internationally recognized government. The coalition initiated military operations employing airstrikes with the aim of destroying the Houthis and the war broke out.

Even in times of war, certain human rights should not be overstepped. To this effect, international laws are put in place, which makes provisions for the rights of people in periods of war or armed conflicts. It is essential to note that although several countries are entangled in the Yemeni Civil War, it is a Non-International Armed Conflict (NIAC), as it does not involve a state at war with another state. Here, the other countries involved are in support of the internationally recognised government with the consent of the president.

The International Humanitarian Laws provide protection for civilians who are not directly involved in the hostility and combatants who are sick, captured, or injured.[9] Acts resulting in the violence to the lives of such persons are prohibited.[10] The Yemeni Civil war has caused infractions to the right to life of both civilians and captured combatants. The airstrikes hit more civilians than the people involved in the conflict which is prohibited.[11] Muhammad Mansour was a victim of the coalition airstrikes. His dead body was found under a building hit by an airstrike.[12]

A child is defined as every person below the age of 18.[13] The International Humanitarian Law provides protection for children in International Armed Conflicts.[14] Contrary to this, the children of Yemen face gross violations of their human rights as a result of the civil war. Children did not start the war in Yemen, but they are paying the highest price.[15]

Appropriate measures are required to be taken to protect children in times of armed conflicts.[16] However, this is not the case in Yemen. The Group of Experts recorded that the father of an eleven years old child, killed during the 09 August 2018 coalition airstrike, lamented after he was given his child’s foot to bury something symbolic.[17] Also, it is reported that this exact coalition airstrike hit a bus carrying roughly 50 children. Some died and others, gravely wounded.[18]

3.2.3 Rape and other Sexual Assaults

Child rape and other sexual assaults have become the order of the day in Yemen. The Amnesty International investigated and discovered that children, as young as eight years old, were raped in the city of Ta’iz.[21] A 16 years old boy narrated his ordeal that in December 2018, he was hit by a rifle and raped by a man.[22] Even adults in Yemen are sexually assaulted. This is a war crime and should incur criminal liability.[23]

Children have a primary right to education.[24] Therefore, children should not be denied education in any manner, even in times of armed conflicts. Contrary to this position, schools in Yemen have been burnt down by the Houthi armed forces, thereby putting fear in the minds of students, parents, and teachers. In the same vein, coalition airstrikes have hit several schools, completely destroying them, thus denying the students their rights to education.

According to Amnesty International’s report,[25] people in Yemen are being arrested arbitrarily and detained for a long time without charge or legal counsel. They are also tortured by prison officials. Some of the victims are human rights activists and journalists. It was alleged that about ten journalists, who were detained since the summer of 2015, were brutally tortured in their cell at night.[26] This happened even before their trial began. Such inhumane treatments violate international humanitarian laws.[27]

Article 9(3) of the International Covenant on Civil and Political Rights[28] (which Yemen is a party to) prohibits unlawful detention. It states that anyone detained on criminal charges shall have the right to trial within a reasonable time or release pending trial. Therefore, it stands as a war crime to detain captured civilians or combatants, without trial, for years.[29]

3.4 Destruction of Objects Fundamental to the Survival of the Population

It is prohibited to destroy objects crucial to the survival of the civilian population.[30] These include food items. However, the people of Yemen are subjected to famine by the parties to the conflict as they place restrictions on the importation of goods, such as food, fuel, or commercial produce into the country.[31] For instance, in November 2017, the coalition placed a total blockade on Yemen for three weeks.[32] There was also siege-like warfare by the Houthi armed forces. This worsened the Yemeni economy. Yemen remains the world’s gravest food insecurity crises with 15.9 million people in crises or worse.[33]

Coalition strikes and the Houthi armed forces destroyed many medical facilities. For example, the 11 June 2018 coalition airstrike hit a medical centre located at Abs district, Hajjah governorate.[34] Although the facility was vacant at the time of the airstrIke, it was no longer possible to stick to the original plan of opening the hospital at the beginning of the cholera outbreak.

The already weak medical system is being destroyed further, making it difficult to fight the cholera outbreak which hit the country after the war started in March 2015, as well as the Coronavirus pandemic ravaging the world right now. This is contrary to the International Humanitarian Laws which states that medical units and transportation assigned to medical purposes shall be respected and protected, except they are used to commit hostile acts outside their humanitarian functions.[35] This is in relation to the provision of Article 3 of the Third Geneva Convention[36] that states that the sick and injured shall be catered for.[37]

The legality of the death sentences dished out by the Specialised Criminal Court (SCC) based in Sana’a, to a lot of charges, in Yemen has been brought into question. It is stated that, in countries which have not abolished the death penalty, sentence of death may be imposed only for the most serious crimes.[38] This should be read to mean that the death penalty should be quite an exceptional measure.[39] In the same vein, the Additional Protocol II prohibits corporal punishments.[40]

Everyone charged with a criminal offense has a right to legal counsel.[41] However, in Yemen, the people arrested, detained, and charged are denied their right to legal counsel. The Bahai’s mass trial is an example. The accused persons and their lawyers were banned from meeting. On an occasion, the lawyers were allowed to sit with them for five minutes and under supervision contrary to their right to communicate confidentially with their counsel. The defendants had to face interrogations without their lawyers.[42] Also, Youssef al Bawab talked about his experience. He only had  access to legal counsel once during his initial interrogations. Judgment was given to him without the opportunity to examine the evidence before him.[43]

Serious violations of international humanitarian law constitute war crimes.[44] The question of what can be done to prevent war crimes in Yemen has resulted in considerable controversies. However, violations can be drastically reduced in the following ways:

The International Humanitarian Laws put a duty on contracting states to not only respect human rights but ensure respect for human rights.[45] Thus, the state must prevent infringements on the human rights of the citizens and also ensure that the international humanitarian laws are implemented. Also, the state has a responsibility to investigate war crimes and prosecute suspects.[46] The Administration of Yemen should perform their duty.

Both the individuals[47] and the state[48] can be held criminally accountable for war crimes.  Therefore, people responsible for the violations of human rights in Yemen should be held criminally liable. This should include responsibility for war crimes they commit, attempt to commit, or aid in the commission. This will, not only serve as a means of punishment but also as a deterrence to future perpetrators of war crimes.

In the same vein, Yemen as a state should be held responsible for the violations of international humanitarian law and should also make reparations for the injuries caused.[49]

4.4 Supply of Ammunition by other Nations

Countries around the world are aware that the Yemen armed forces use weapons supplied to them for war crimes. Yet countries such as the USA, UK, France, and other European countries continue to supply arms to coalition members. Thus, war crimes can be reduced if countries cease to sell and transfer weapons to the parties involved in the armed conflict.

There should be an impartial judicial system to check on the actions of the state and individuals. Therefore, if the state neglects its duty to ensure the enforcement of international humanitarian laws, an external force should be able to detect this and act immediately in order to protect human rights. To this effect, Yemen should be urged to ratify the Rome Statute of the International Criminal Court.[50] This will be a form of sanction to the individuals and states that fail to perform their duties under the international humanitarian law.

The individuals, the state, neighbouring countries, as well as the International community have different roles to play in putting an end to the sufferings of the people of Yemen, which result from the gross violation of their human rights. Thus, in order to promote and protect the human rights of the citizens of Yemen, they must perform their respective duties in the implementation of International Humanitarian Laws.

Ogunwumi Moyoninuoluwa is a 300 level law student of the University of Lagos. Born on the 22nd of November, 2001. The author has a keen interest in Human Rights and Alternative Dispute Resolution.

[20] Additional Protocol II, Article 4(3)(c); ”Children who have not attained the age of fifteen shall neither be recruited in the armed forces or groups nor allowed to take part in hostilities”; Customary International Humanitarian Law, Rule 136;137.

[39] UN Human Rights Council, Capital punishment and the implementation of the safeguards guaranteeing protection of the rights of those facing the death penalty, A/HRC/42/48,  28 August 2019, available at: <https://www.ohchr.org/Documents/Issues/DeathPenalty/A_HRC_42_28.docx> (accessed 20 August 2020), p. 3-4

A VIRTUAL WORLD WITHOUT BORDERS: THE INFRINGEMENT OF TRADEMARKS ON THE INTERNET 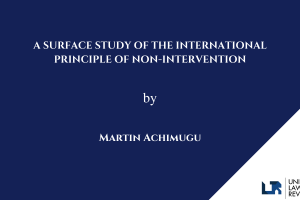 A SURFACE STUDY OF THE INTERNATIONAL PRINCIPLE OF NON-INTERVENTION 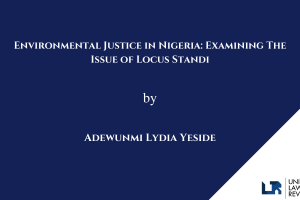