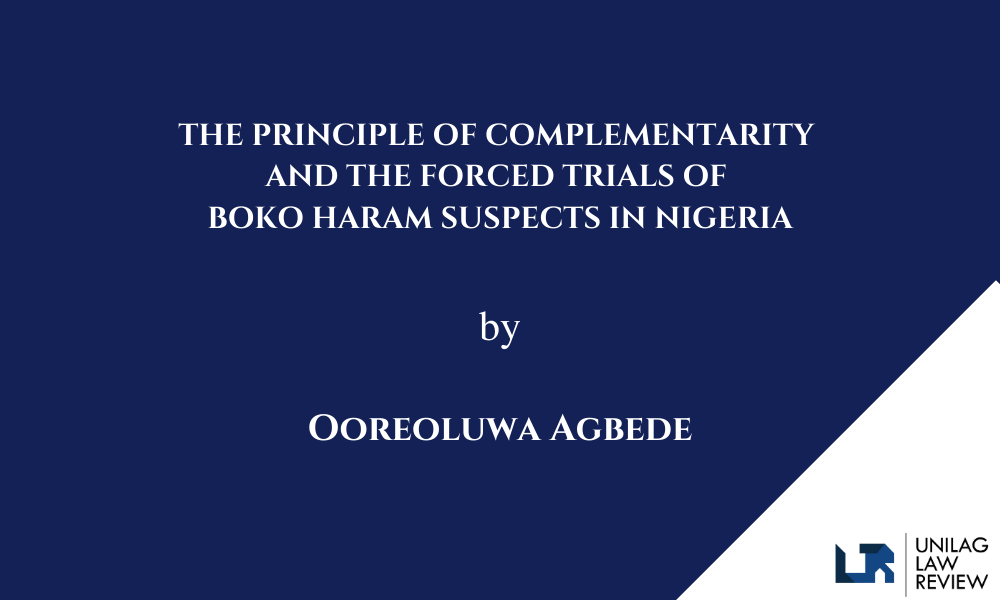 Nigeria, in depositing its instrument of ratification to the Rome Statute on 27 September 2001 vested the jurisdiction over Rome Statute crimes committed within its territory or by its nationals from 1 July 2002 onwards, on the International Criminal Court (ICC), but this jurisdiction of the ICC is subject to the principle of “Complementarity” as provided in the Rome Statute. This principle which supports the supplementary position of the ICC, deprives the ICC of jurisdiction where the State party to the Statute has either investigated, begun to investigate and/or prosecute Rome Statute crimes, where the national court has jurisdiction. The statute places the responsibility of determining if a situation meets the criteria required by the Rome Statute to warrant the ICC’s attention in terms of investigation and prosecution, on the Office of the Prosecutor (OTP). For the OTP to determine that a case deserves investigation, the alleged crime must be one under the ICC’s subject matter jurisdiction, it must have jurisdiction in light of the principle of complementarity, and the investigation must serve the interest of justice.

Internal conflicts, violence, disturbances, and tensions have been challenges of Nigeria for many years. From the Niger-Delta insurgency in the South, Farmers-Fulani herdsmen clashes in the North Central, to the most internationally infamous, Boko Haram versus Nigerian Government mainly in the North-East, which began in 2009 and still exist today even after several political declarations of ‘practically defeated’. Boko Haram has admitted to and claimed attacks like targeted killings, suicide-bombers attacks, widespread abductions, child trafficking, burning and looting, and attacks on military centres, schools, teachers, and students as theirs.

Both ends of the war, the Boko Haram and the Nigerian Security Forces have violated International Humanitarian Laws, but it is trite knowledge that the criminal activities of Boko Haram fall under the subject matter jurisdiction of the International Criminal Court. The OTP reported in its 2013 Article 5 report that there is a reasonable basis to believe that, since July 2009, Boko Haram has committed several crimes against humanity.

Multiple persons comprising of men, women and children, alleged to be supporters or active members of Boko Haram have been arrested since 2009 in the North-East Nigeria. Most of these arrests appear to be entirely arbitrary. The custom is usually that, following Boko Haram raids, soldiers go to towns or villages and round up persons identified as members of Boko Haram by paid informants, who in order to get paid, usually provide false information. Amnesty International has also documented the prevalence of arrests during house-to-house raids and at checkpoints, as well as arrests targeted at suspected Boko Haram members’ relatives. Upon recapture of towns formerly in control of Boko Haram, the Nigerian military would arrest some of the internally displaced people (IDPs) fleeing violence, on suspicion of affiliation to Boko Haram, and these random arrests during particularly targeted the young men and some of the women who were accused of being married to Boko Haram members.

Despite the lack of a centralized Data, ‘official sources’ in the 2019 report suggest that over 2,300 Boko Haram suspects arrested between 2010 and 2017 were held in pre-trial detention, and as of September 2017, 13 of the 2,300 persons had been tried for “terrorism activities” connected with Boko Haram and only nine of the 13 were convicted. Asides these, some terrorism cases were ongoing at various Federal High Court Divisions.

The Nigerian Government made public in October 2017 that 1,669 Boko Haram suspects held at a military detention centre in Kainji, Niger State, 651 Boko Haram suspects held in a detention centre and a State prison in Maiduguri, Borno State were awaiting trial. In addition, an unknown number of persons is reportedly held in so-called rehabilitation camps for repentant and surrendered Boko Haram members under the control of the National Security Advisor. The Nigerian authorities have initiated not less than three rounds of mass trials before special courts of the Federal High Court in Niger State, to process various number of suspected Boko Haram members held in Kainji military detention, and it appears from the information available that the majority of defendants were discharged without trial for lack of evidence, most of which raised concerns as to fair trial and due process.

The Office received some documentation from the Attorney General of the Federal Republic of Nigeria with respect to the attacks of Boko Haram against civilians in Suleja and Dakna, premises of a national newspaper in Kaduna, and the April 2014 attack against the Nyanya Motor Park in Abuja. The documentation shows that part of these proceedings led to judgements and prison sentences. All of these data being delivered from Nigeria to the OTP suggests that steps are taken to prosecute suspected Boko Haram members.

Amnesty International research shows another data that thousands have died in detention, from starvation, thirst, severe overcrowding that led to spread of diseases, torture and lack of medical attention. Amnesty International’s research indicates that prior to October 2017, only a handful of cases were brought before Federal High Courts across the country in relation to crimes by alleged Boko Haram members. The Ministry of Justice in responding to Amnesty International’s request for information, claimed that as of October 2017, a total of 12 Boko Haram suspects had been convicted in ‘terrorism cases’, and two of these cases appear to relate to high profile Boko Haram members, one being the case of the alleged mastermind of the 2011 ‘Christmas Day bombing’ in Madala, Niger State, Karibu Abubakar Dikko also known as Kabiru Sokoto and the case of the alleged leader of Ansaru splinter group, Usman Umar Abubakar AKA Khalid Al-Barnawi. Another data confirmed that close to 5,000 people had died in detention in Giwa barracks alone between 2013 and 2015, and these deaths amongst others were unreported.

Although the above shows some steps towards investigation and prosecution have been or are being taken by the authorities to ascertain the criminal responsibility of suspected Boko Haram members on face value, it also shows a questionable desire of the Nigerian government to prosecute these cases, even when the numbers clearly show that the court are overwhelmed to the extent of conducting mass trials, so why can’t the Nigerian state allow the ICC have and exercise jurisdiction over Boko Haram suspects, instead of allowing a suffocating judiciary try these sensitive and serious crimes?

The principle of complementarity is to the effect that the ICCs exercise of jurisdiction is subject to the failure, unwillingness or inability of the national judicial system of a state party to genuinely investigate or prosecute international crimes. In simple words, the International Criminal Court is intended to supplement, not to supplant national jurisdictions, and the preamble to the ICC Statute recognizes the power and responsibility of every State to exercise criminal jurisdiction over international crimes.

The shortcomings of the trials against Boko Haram suspects in Nigeria, which from the perspective of the Human Right Watch which monitored the trials, include;

The shortcomings and manner the Nigerian Government has conducted itself; questionable trials, questionable incarceration and detention, and recently, questionable releases, raises questions as to the honesty of the Nigerian Government in investigating and prosecuting Rome Statute Crimes, making it a plausible deduction and conclusion that these few trials may be aimed at deflecting the OTP’s attention and keeping the ICC at bay by dishonestly using the complementarity principle to ensure the ICC never has jurisdiction.

Ooreoluwa Agbede is a graduate of the University of Lagos and a student of the Nigerian Law School, Abuja campus. He was a Senior Associate Editor and Associate Editor of the UNILAG Law Review. He is an avid reader who also writes across various forms, including fiction.