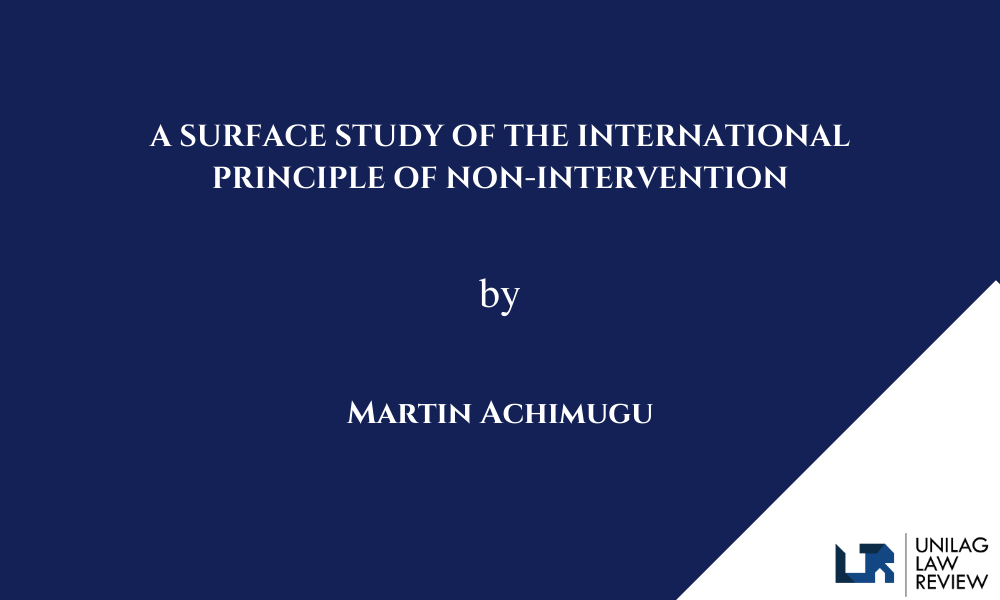 Before it became a recognized international principle, the intervention was commonplace in global discussions and occurred in some ways which we shall examine further.

It was also possible for nations to indirectly interfere in the affairs of other states without the use of force. One such way was through subversive intervention which refers to any activity by one state with the intention to affect the situation in another state. Such activity was conducted through mediums such as radio or television shows, aiming to encourage revolt or civil strife in other states or provide assistance to illegal activities that oftentimes turned violent.[5]

Another is through economic intervention which involves the imposition of sanctions, embargoes, and boycott by interfering with trade and shipping and by denial of access by land and water. Furthermore, banning export and import or external economic policy impositions (interventions) by International Financial Institutions (IFIs), while taking action under Article 4112 of the UN Charter, is another form of economic intervention especially when a wrongful act is done by that state.[6] Economic intervention is a slightly grey area however as it is sometimes difficult to draw a line between the legitimate economic sanctions and illegal pressure put upon another state. However, to determine whether economic intervention is legitimate under law, two tests are important: identifying the relationship between the means and the object and following the procedure laid down under Chapter VIIof the UN Charter (Resolution by United Nations Security Council [UNSC].[7] The ICJ in Military and Paramilitary Activities in and against Nicaragua Case stated that the mere refusal or termination of aid to developing countries or the breach of an economic treaty do not constitute a breach of the non-intervention principle as states are free to decide which other states they want to give economic support to.[8]

Finally, diplomatic intervention. This generally does not amount to illegal intervention but may be considered forbidden intervention, if it involves communications of threatening tone, use of military or other coercive measures.

In safeguarding the sovereignty of nations, Article 2.4 of the UN Charter, widely regarded as the most important manifestation of the principle of non-intervention, was declared (although it is occasionally not associated with this principle)[9]. It frowns on the use of threat and force in international relations. Threats to use force contravene the principle; even where it is unclear if the threat were carried out it would necessarily be unlawful. Furthermore, Article 2.7 of the Charter of the United Nations provides against United Nations intervention in matters which are within the domestic jurisdiction of any state;[10]although it provides for an exception to this rule further down the charter.

The Friendly Relations Declaration[11] included under the principle of non-intervention that no State or group of States has the right to intervene, “directly or indirectly, for any reason whatever”, in the internal or external affairs of any other State. Therefore, all other forms of intervention or attempted threats including armed intervention against a State or its regional elements violate international law.[12]

The growth of international law on human rights in treaties and in customary international law as well, and in particular acceptance of the rights of States to criticize other States’ human rights record and the inter-State complaint mechanisms, has made for a suitable check to prevent the incursion of nations in the affairs of other states.

It seems to be still well-established the diplomats should not interfere in the internal affairs of the State to which they are accredited. Article 41 of the Vienna Convention makes it abundantly clear that state officials serving as diplomats are not to interfere in the internal affairs of the receiving State. It is the duty of all persons enjoying such privileges and immunities to respect the laws and regulations of the receiving State.[13]

The International Court further expounded on the principle of non-intervention in its 1986 judgment in the Nicaragua case,[14] setting a precedent for future claims on the subject. According to the court, the principle of non-intervention requires every sovereign State to conduct its affairs without outside intervention; though examples of trespass against this principle are not infrequent, the Court considers that it is part and parcel of customary international law. The Court went on to say that “the principle forbids all States or groups of States to intervene directly or indirectly in the internal or external affairs of other States.” Intervention is wrongful when it uses methods of coercion regarding such choices, which must remain free ones. Here, the plea of Nicaragua was that the United States had violated its treaty obligations to Nicaragua under Article 2(4) of the UN Charter by involving in training, recruiting, equipping, arming, financing, supplying and supporting, and aiding and directing military and paramilitary actions in and against Nicaragua. This decision served as the guiding principle in the Democratic Republic of Congo v Uganda on 19 December 2005, when it concluded “that Uganda had violated the sovereignty and also the territorial integrity of the DRC since it had not consented to the presence of Ugandan troops on its territory as well as actively extending military, logistic, economic and financial support to irregular forces operating on the territory of the DRC.[15]

Indeed, the widely upheld character of the principle of non-intervention by governments has made it jus cogens.[16] The General Assembly, in its Declaration of 9 December 1981, espoused that the non-intervention principle embodies the requirement that States refrain from entering into agreements with other States to intervene or interfere in the internal or external affairs of other States.[17] Although this declaration, like many others, is not in itself law-making, it nevertheless restates the law, and at least reflects, to a large extent, the general legal conviction of States in this regard.

4.0 EXCEPTIONS TO THE PRINCIPLE OF NON-INTERVENTION

The principle of non-intervention, however, like most legal principles is not without its exceptions. Under the UN Charter, only two entities have permission to intervene: the UN and a state. No other entity can violate the principle of non-intervention through their behavior as international law provides under the Responsibility of States for Internationally Wrongful Acts, 2001, that state responsibility becomes operative for the acts of private entities if its organs have cooperated with these entities and thereby contributed to the breach of an international state obligation.[18] Let us analyze intervention by the UN or a state.

Under Chapter VII of the charter, collective intervention is stated as an exception to the general principle of non-intervention mentioned under Article 2(7) of the Charter. UN intervention may come in the form of collective intervention. In this instance, the UNSC is empowered to take collective actions where there is a threat to the peace, a breach of the peace, or an act of aggression has taken place. For a collective intervention to commence, first, UNSC determines under Article 39 of Chapter VII of the UN Charter whether there exists a threat to peace or breach of the peace or whether any act of aggression has taken place and makes recommendations or decides what measures are to be taken to maintain or restore international peace and security.[19] This means that the UNSC will not immediately resort to force or military aggression in cases of suspected threat to international peace and order. If the UNSC is satisfied with the existence of such threat or breach, then it is required to use provisional measures, provided it is sanctioned by an agreement involving all its permanent members. However, where such measures prove to be inadequate, it can take such action by air, sea, or land forces of the member state as are essential for maintaining international peace and security.[20]

For sanctioned collective intervention, one of the reasons is that it must be on humanitarian grounds. Today, human rights law has become a part and parcel of international law; therefore, humanitarian intervention has become a debatable issue. Humanitarian intervention in a strict sense means an international intervention through the use of force for the protection of the inhabitants of another state who are subjected to human rights violations. Once it has been adjudged that there are aggravated violations where the national authorities either are unwilling or unable to protect its nationals and the situation affects international peace and security, provisions of Chapter VII will be applicable. An example of intervention by the UN is in Iraq on behalf of the Kurdish people in 1991.[21] A civil war is also one of such grounds permitting collective intervention.  Although a civil war is an internal affair of the state, which under Article 2(7),[22] UN cannot intervene, if such a civil war threatens to affect international peace and security, the provisions of Chapter VII will be applicable. According to Article 39, the Security Council must first determine whether such a civil war in a state will pose a threat to the peace or breach of the peace or amount to an act of aggression.[23] Finally, if it has been revealed to lead to possible grave consequences for the entire globe, environmental catastrophes may be considered a threat to peace, and hence, legitimate collective action by the UNSC may be taken. Although the UNSC has not taken any collective action on an environmental matter, some jurists believe that environmental catastrophes may lead to collective interventions in the future as the practice has shown that the definition of a threat to peace is widening with time.

Furthermore, despite articles 2(3) and 2(4) of the UN Charter making emphasis on the principle of non-intervention amongst states, Article 51 makes provision for the exception of self-defense.   According to the rules of international law, whenever a state intervenes in the internal affairs of another state violating the non-intervention principle, the affected state can react to such breach with a reprisal, which is permitted under Article 51 of the Charter.[24] Therefore, according to Article 51 of the UN Charter, whenever an arms attack occurs against a state, the affected state can use force against the wrongdoer state on the ground of self-defense. In the case of The Caroline, Mr. Webster, the Secretary of the United States of America, laid down a very important principle for exercising the right of self-defense: the necessity of self-defense should be instant, overwhelming, and leaving no choice of means and no moment for deliberation. This principle was affirmed by Nuremberg Tribunal in 1946 and by the ICJ in the Corfu Channel case.[25]

In modern times, the principle of non-intervention has become jus cogens. Neither the UN nor a state can intervene in the domestic jurisdiction of another state without reasonable proof and valid intentions. Although there are various instances of nations violating this principle amongst one another, states need to adhere to this principle as its existence remains necessary for the safeguard of the sovereignty nations and for the achievement of global peace and security.

Martin Achimugu is a final year student of the Faculty of law, University of Lagos. He possesses experience writing, researching and speaking on various aspects of the law with particular interests in Human Rights related issues and International Law. He is also an Executive Editor at the UNILAG Law Review.