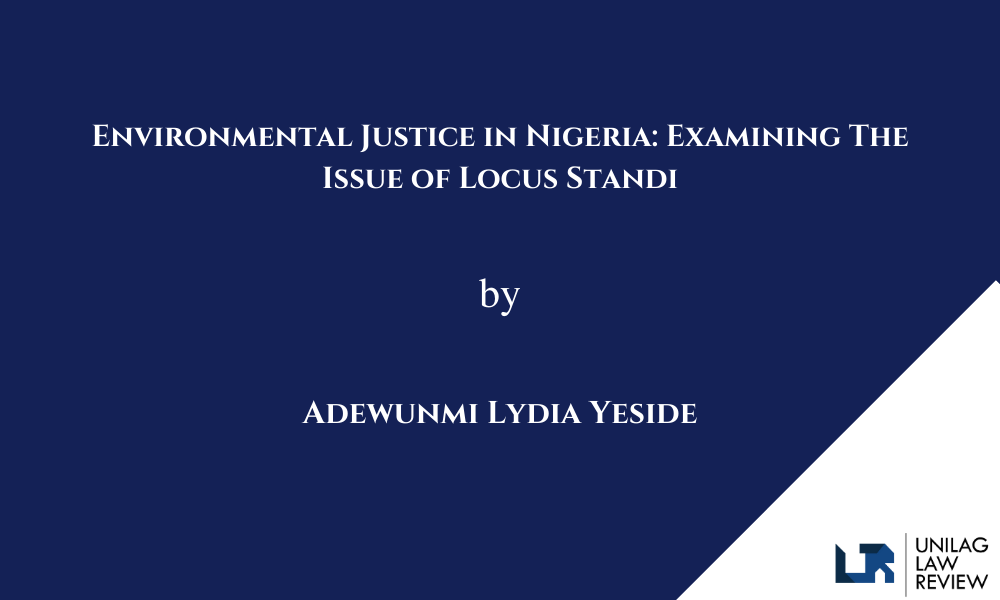 the fair treatment and meaningful involvement of all people regardless of race, color, national origin, or income, with respect to the development, implementation, and enforcement of environmental laws, regulations, and policies.1

The Environmental Justice Movement emerged in North Carolina, United States of America in the early 1980s and since its inception, it has been emphasized that environmental problems cannot be solved without revealing the practices maintaining social injustices. This means that environmental justice is majorly concerned with the fair distribution of environmental quality among social groups in such a way that a particular group of persons doesn’t get all the benefits of development while the other gets the burden. By the principle, justice will only be deemed as attained when everyone enjoys the same degree of protection from environmental and health hazards.

Since 1956, when oil was discovered in commercial quantity, Nigeria and her economy have been heavily dependent on the petroleum industry. Nigeria ranks as Africa’s largest producer of oil, and so it is inevitable that a high level of environmental pollution emanates from the exploitation of oil. This has subsequently resulted in environmental destruction due to the neglect and lack of concern of the multinational companies in environmental management.

It is obvious that environmental laws are put in place to mitigate or prevent environmental problems which emanate from anthropogenic activities in the quest for economic growth and development. According to M.T. Ladan, Environmental law in Nigeria is a “body of rules and regulation which have as their object or effect, the protection of the environment from pollution and the wasteful depletion of natural resources and ensure sustainable development”2.

The Nigerian environmental law includes all the sources of law such as the Constitution, international treaties, state laws, local government laws and common law. The right to environment of every Nigerian citizen is guaranteed under the Section 20 of the 1999 constitution of the Federal Republic of Nigeria 3which states that “The State shall protect and improve the environment and safeguard the water, air and land, forest and wildlife of Nigeria”.

However, the Constitution, by virtue of Section 6 (6) (C)4, renders the judiciary impotent in adjudicating on environmental matters:

Recent scholarly opinions and cases have tilted towards the assertion that environmental rights of citizens are equally as important as the fundamental human rights guaranteed in the Fourth Chapter of the Constitution. As such, there should be a way to reassess the justiciability of the right to environment. This means that in action for the violation of the right to environment, the cocktail approach (Section 20 on the Right to Environment5, Section 336 on Right to Life, Section 347 on Dignity of the Human Person and Article 24 of the African Charter8 on the Right to a Favorable Environment) can be used in establishing the Right to a Healthy Environmental Life. This is of course, achievable by virtue of Section 129 of the Constitution which allows for the Africa Charter to be made applicable in Nigerian courts as long as it has been enacted into law by the National Assembly. In Jonah Gbemre v. Shell Petroleum Development Company of Nigeria Ltd. and ors10, the court held that the practice of gas flaring is unconstitutional as it violates the guaranteed fundamental rights of life and dignity of human persons provided in the Constitution of the Federal Republic of Nigeria and the African Charter on Human and Peoples Rights.

It is evident that in Nigeria, environmental justice is not sufficiently served as there is the constant problem of pollution. Access to justice is made stiff by lax environmental laws, a lack of independent judiciary and judicial institutions, and lack of will to enforce compliance of legal provisions. The issue of Locus Standi adds to the maintenance of this status quo as it further encourages lack of access to environmental justice.

3.0 THE PRINCIPLE OF LOCUS STANDI

Locus Standi is a Latin word which means “a place of standing”; “standing in court”. Broken down into simple words, it means the standing to sue. It is the ability of a party to demonstrate to the court or a competent tribunal, a sufficient and direct connection to harm from the law. This means that it is the right to bring an action, to be in heard in court, or to address the court on a matter before it. The rule of Locus Standi is based on the approach that judicial time ought not to be wasted over a busybody or meddlesome interloper. Therefore, once a plaintiff has no Locus Standi, it is not necessary to consider whether there is a genuine case on the merits; the case must be decided as incompetent.

In Adesanya v. President of the Republic of Nigeria & Anor11, the court asserted that the term “Locus Standi” denotes the legal capacity to institute proceedings in a court of law. In this case, the court held that the claimant must have some justifiable interest which may be affected by the action or that he will suffer injury or damage as a result of the action.

The determination of Locus Standi in Nigeria zeros the ‘sufficient interest’. Here, the right to sue accrues only to a person who has a legal right or whose legal right has been adversely affected or who has suffered or is likely to suffer special damage in consequence of an alleged wrong. The courts are determined in ensuring that public bodies can carry out their duties without facing legal harassment by busybodies. However, it is also important that they ensure that those with power do not abuse this principle and act contrary to public interest. The question then arises; does this make the realization of environmental justice stiffer?

4.0 DOES LOCUS STANDI ENCOURAGE LACK OF ACCESS TO ENVIRONMENTAL JUSTICE IN NIGERIA?

As previously addressed, for a party to have Locus Standi, it must be established that the party filing the cases must have “sufficient connection” to the issue. The principle could be seen as oppressive it consequently leads to many case dismissals at the mere fact that the right of the person filing suit has not been directly infringed upon. These problems associated with the application of Locus Standi in Nigerian courts always result in the dismissal of justice, thereby making prospective litigants lose confidence in the court.  Many environmental litigations in Nigeria have failed because of a lack of Locus Standi by the claimants.

In Oronto Douglas V. Shell Development Company Ltd12, the plaintiff sought compliance with the provisions of the Environmental Impact Assessment (EIA) Act in relation to the Liquefied Natural Gas (LNG) project at Bonny being executed by the defendants. The court held that the plaintiff had no standing to institute the action since he had shown no evidence prima facie that his right was affected or any direct injury caused to him, or that he suffered any injury more than the generality of the people.

The scope of Locus Standi in cases pertaining to environmental degradation has, however, recently been extended by the Supreme Court. In the 2019 case of Centre for Oil Pollution Watch v. Nigerian National Petroleum Corporation (NNPC13), the court overturned the decision of the Court of Appeal which held that the Appellant had no Locus Standi to bring an action against the NNPC for failing to clean up or reinstate the Ineh/Aku streams after its corroded pipeline ruptured, fractured and spewed its entire contents into the surrounding streams and rivers in Abia State, Nigeria.

In the statement of claim, the Centre for Oil Pollution Watch Non-Governmental Organisation at the Federal High Court carrying out the function of ensuring reinstatement, restoration, and remediation of environments impaired by oil spillage/pollution. In defending the action filed by the Centre, the NNPC denied liability for the oil spillage and also filed an objection challenging the Locus Standi of the Centre to file the action. The Federal High Court agreed with NNPC’s objection and struck out the Centre’s action. The Centre, not satisfied with the decision, filed a Notice of Appeal against this decision at the Court of Appeal; however, the Court of Appeal affirmed the ruling of the Federal High Court and dismissed the appeal.

The Centre subsequently filed a Notice of Appeal at the Supreme Court against this decision. In allowing the Centre’s appeal, the Supreme Court held that it would be wrong for the court to allow outdated technical rules of Locus Standi to prevent public groups from bringing an action to Court to stop unlawful conduct. The court thereby held that in environmental matters, Non-Governmental Organisations have the Locus Standi to sue.

Various oil trans-national corporations and oil companies are guilty of extracting oil with impunity. This leads to environmental abuse, pollution and subsequently, degradation. Where there is a law, there is a remedy. For this reason, Nigerian courts are to ensure that citizens’ environmental justice is sufficiently realized. The courts are also to ease the stiffness and harshness that the principle of Locus Standi poses to victims of environmental by taking a cue from the Supreme Court’s decision in Centre for Oil Pollution Watch v. Nigerian National Petroleum Corporation (NNPC14). The Supreme Court was commendable in its decision, and this case is not only a landmark in Nigeria’s legal system, but it also provides hope for future environmental litigations.

2 Ladan, M.T. “ Trend in Environmental Law and Access to Justice in Nigeria”

3 The 1999 Constitution of the Federal Republic of Nigeria (as Amended).

4 The 1999 Constitution of the Federal Republic of Nigeria (as Amended).

AN OVERVIEW OF THE NIGERIAN LEGAL FRAMEWORK ON EMERGENCY ARBITRATION

A SURFACE STUDY OF THE INTERNATIONAL PRINCIPLE OF NON-INTERVENTION