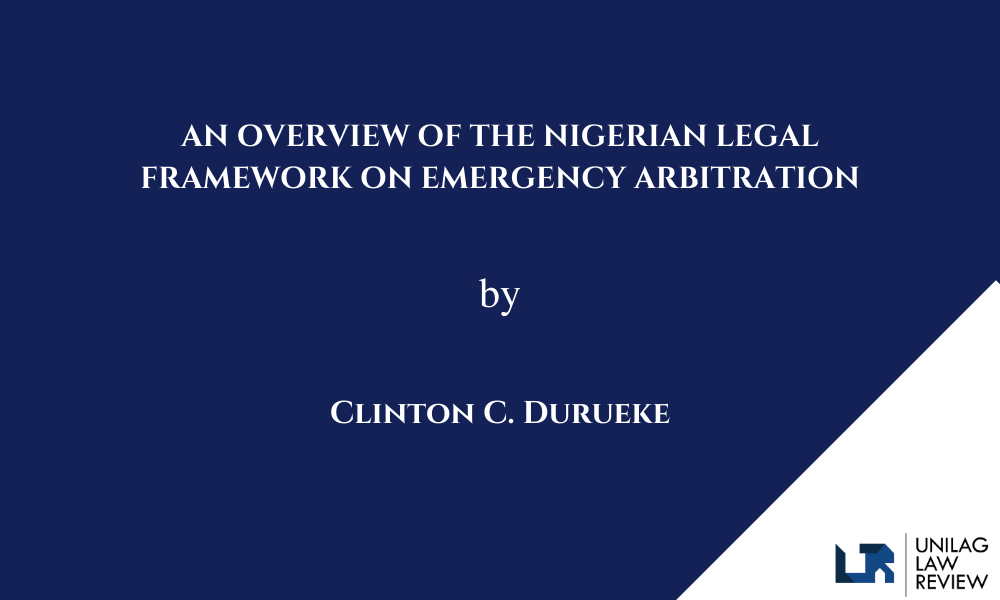 Arbitration has long proven to be an effective means of resolving disputes of a commercial nature, being an alternative to making recourse to traditional courts for various kinds of relief. However, developments in the last two decades have necessitated the evolution of a compelling subset of arbitration, because of the increased need for parties to safeguard their interests before the commencement of the main arbitral proceedings. This article seeks to critically examine this subset, known as emergency arbitration, the interim reliefs parties to an emergency arbitration often seek, the conditions that must be met for a successful relief application, emergency arbitration in global practice, the Nigerian legal framework on emergency arbitration and the general limitations of the subject matter.

An emergency arbitrator has been described as an arbitrator appointed by an arbitral institution on an urgent basis to deal with an application for interim relief which cannot wait for the constitution of the tribunal that is to deal with the substantive dispute between the parties.1 The concept of emergency arbitration came into being in response to the growing need to resolve disputes faster in arbitration, especially when there is a high likelihood that parties would suffer irreversible damage before the constitution of an arbitral tribunal–which can take months in some instances.2

Interim reliefs granted by an emergency arbitrator or arbitral tribunal could be in the form of a preliminary order, a procedural order, a direction, an interim award or a partial award. While the International Chamber of Commerce3 requires that an emergency arbitrator’s decisions take the form of an order, the Stockholm Chamber of Commerce4 and the International Centre for Dispute Resolution of the American Arbitration Association5 permit a decision in the form of either an order or an award.6

The reliefs commonly sought by parties in emergency arbitrator procedures include asset freezing orders, prohibitive and mandatory injunctions, orders for the preservation and inspection of evidence, preventive orders to avoid misuse of intellectual property or confidential information, as well as anti-suit injunctions. While an emergency arbitrator’s interim orders are not binding on the arbitral tribunal, with respect to any question, issue or dispute determined, they have to be varied, discharged or revoked, partly or wholly, by a subsequent order or award made by the arbitral tribunal upon application by any party or upon its own initiative.7

The success of a party’s application for an interim relief through an emergency arbitrator is dependent on two main factors. One is fumus boni iuris, which is the reasonable possibility that the party seeking interim relief will succeed on the merits, while the other is periculum in mora, which is the likelihood that damages will not suffice to compensate for the loss, if the measure is not granted immediately.8 These factors are reflected in Article 26(3) of the CIArb Arbitration Rules 2019.

Most arbitration rules across all nations follow an ‘opt-out’ policy with respect to emergency arbitration, which means that only if the agreement between the parties specifically excludes “Emergency Arbitrator Provisions” would these provisions not apply in toto.11

The Arbitration & Conciliation Act12 is the primary legislation on arbitration in Nigeria. This is supplemented by the various Arbitration Laws of the different states of the federation.

Section 29 of the Lagos State Arbitration Law 2009 deals with the recognition and enforcement of interim measures by the court. Section 29(2) provides that an interim measure issued by an Arbitral Tribunal shall be binding, unless otherwise provided by the Arbitral Tribunal and may be recognized and enforced upon application to the Court, irrespective of the jurisdiction or territory. The concept of an emergency arbitrator in this context is strengthened by Section 7(1), which provides that the parties are free to agree on the number of arbitrators to constitute Number of the Arbitral Tribunal. However, the fact that parties, as opposed to arbitral institutions, appear empowered by this Law to choose their emergency arbitrators remains an issue.

While several states such as Singapore, New Zealand, Hong Kong and the Netherlands have amended their national arbitration laws to enable the enforceability of emergency arbitrator’s decisions, other states, notably Russia, Australia and France, are yet to specifically address the enforceability of emergency arbitrator’s decisions. These states are thus likely to adopt the traditional approach under the United Nations Convention on the Recognition and Enforcement of Foreign Arbitral Awards, of enforcing awards that are final as to the relevant issue, to the exclusion of interim awards or orders.15

The interim reliefs granted in emergency arbitration proceedings are generally not applicable to third parties to the arbitration agreement and thus, are restricted to the parties directly involved in the arbitral proceedings and their successors. Article 29(5) of the ICC Arbitration Rules 2017 provides that its Emergency Arbitrator Provisions shall apply only to parties that are either signatories of the arbitration agreement under the Rules that is relied upon for the application or successors to such signatories. Hence, parties seeking urgent interim reliefs against third parties may have to apply to national courts.

Judging by Articles 1(5), Appendix V of the ICC Arbitration Rules 2017, which, inter alia, mandates the Secretariat to transmit a copy of the application for emergency measures in question and the accompanying documents to the responding party, if and to the extent that the President of the Court considers, on the basis of the information contained in the application, that the Emergency Arbitrator Provisions apply with reference to Article 29(5) and Article 29(6) of the Rules, and Article 2(3), Appendix V, which mandates the Secretariat, inter alia, to notify the parties and transmit the file to the emergency arbitrator once the emergency arbitrator has been appointed, it can reasonably be inferred that emergency arbitration is not suitable for ex parte reliefs. Again, parties seeking such may have to apply to national courts.

Clinton C. Durueke is a 400 Level Student of the Faculty of Law, University of Lagos. He is also the current Head of Chambers of the Gani Fawehinmi Students’ Chambers, University of Lagos. He is a prolific writer, with interests in Alternative Dispute Resolution, Intellectual Property Law and Energy Law. He hopes to write further on these areas of Law in the near future.

1 P Clifford “Emergency arbitration–what’s it all about?” available at https://www.lexisnexis.co.uk/blog/dispute-resolution/emergency-arbitration-whats-it-all-about (accessed 9 August 2020).

4 Arbitration Rules of the Arbitration Institute of the Stockholm Chamber of Commerce, Art. 32(3).