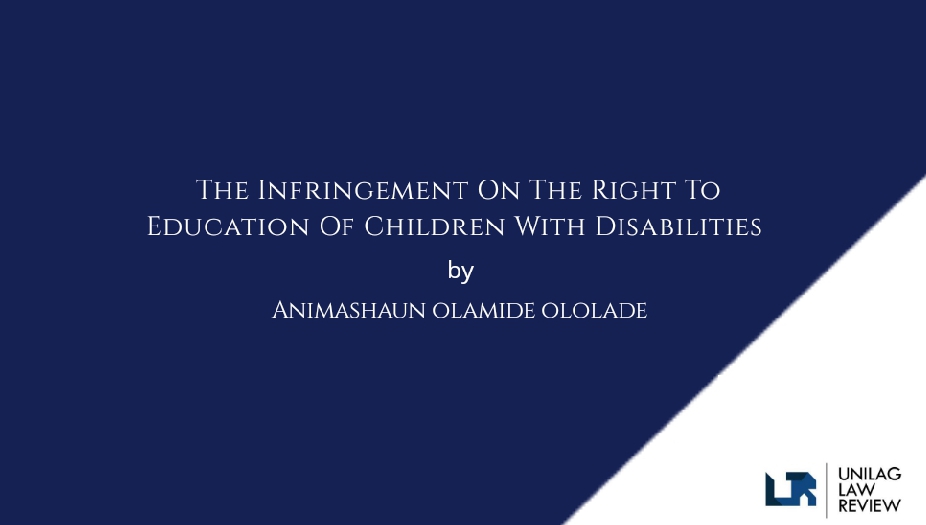 According to K.D. Beiter, children are particularly a vulnerable group. The United Nations International Children’s Emergency Fund (UNICEF) purports that unless the world tackles the lack of fairness and justice in relation with children today, 60 million children will be out of school, 167 million children will live in extreme poverty and 69 million children under age 5 will die between 2016 and 2030. UNICEF estimates that there are about 140 million children who have never been to school, 246 million children engaged in exploitative child labour and 300 000 child soldiers, some as young as eight years of age.

Children with disabilities are even more prone to vulnerability as they have been discriminated, subjugated and oppressed on account of their disabilities. According to the United Nations (UN), 10 per cent of the world’s population or 650 million people live with one disability or another. Rieser states that at least 10 per cent of the world’s people have a significant, long-term, physical or mental impairment which prevents them from taking part in the usual educational, social and economic activities of their communities. Benkink and Benkink is of the view that this is due to barriers in societal attitudes regarding disabilities, the built environment, and the way society is organized preventing the disabled from participating on an equal level with others. According to the United Nations High Commissioner for Human Rights in a report to the Economic and Social Council, the education sector, for instance, discrimination against the disabled varies from an outright denial of educational opportunities to more subtle forms of discrimination, such as isolation and segregation imposed in the forms of physical and social barriers. For example, according to the United Nations Educational, Scientific and Cultural Organization (UNESCO), 90 per cent of children with disabilities in developing countries do not attend school.

The right to education has been protected in a number of important international human rights instruments. At the international level, the right to education was first given recognition in a series of treaties concluded after World War I under the auspices of the League of Nations. However, with the formation of the UN, a good number of instruments protecting the right to education have further been adopted. These instruments include the Universal Declaration of Human Rights (Universal Declaration), 1948, the International Covenant on Economic, Social and Cultural Rights (ICESCR), 1966, the International Covenant on Civil and Political Rights (ICCPR), 1966; the UNESCO Convention Against Discrimination in Education, 1960, the International Convention on the Elimination of All Forms of Racial Discrimination (ICERD), 1966, the Convention on the Elimination of All Forms of Discrimination Against Women (CEDAW), 1979, the Convention on the Rights of the Child (CRC), 1989, the International Labour Organisation Convention, 1989, the World Declaration on Education for All Meeting Basic Learning Needs, 1990, the African Charter on Human and Peoples’ Rights (African Charter), 1981 and the African Charter on the Rights and Welfare of the Child, 1990 (African Children’s Charter).

The right to education is recognized in African regional human rights instruments. For example, Article 17(1) of the African Charter, states that “every individual shall have a right to education” and Article 13(2) of the African Charter deals with handicapped children and states that “State Parties shall ensure that the disabled child has effective access to training.in a manner conducive to the child achieving the fullest possible social integration, individual development and his cultural and moral development.”

The right to education is also recognized at the Nigerian National level, Section 18(1) of the 1999 constitution of the FRN which provides for the Fundamental Objectives and Directive Principles of State policy states that “Government shall direct its policy towards ensuring that there are equal and adequate educational opportunities at all levels”. Section 18(2) and 18(3) goes further to state that “Government shall promote science and technology, strive to eradicate illiteracy and to this end, provide, free, compulsory and universal primary education, free secondary education, free university education and free adult literacy programme”. Unfortunately, Chapter 2 of the 1999 constitution of the FRN is non-justiciable by virtue of section 6(6)(c) of the 1999 constitution. In the popular case of Uzoukwu v Ezeonu the Nigerian Court of Appeal said that “There are other rights which may pertain to a person which are neither fundamental nor justiciable in the court. These may include rights given by the constitution under the Fundamental Objectives and Directive Principles of State Policy under Chapter 2 of the Constitution.” The Nigerian government also re launched the Universal Basic Education (UBE) in 2000 and similarly the Child Rights Act (CRA) in 2003 which provides for the right to education.

Conclusively, it is my proposal that the provisions on the rights to education of children, (in which all of them do not exclude children with disabilities) as contained in the various international human rights instruments, should be domesticated and implemented in the countries where they have not been domesticated or implemented and access to education should not be denied by placing physical barriers such as staircases to classrooms. Also, educational materials should be made available in forms that are accessible to the children with disabilities.

It is also my recommendation that government in all countries should provide all the necessary facilities to ensure easy access to education for children with disabilities. To this end, government must provide inclusive education or ensure the integration of special classes and units into private/public schools, provide regular census and monitoring of people with special needs to ensure adequate educational planning and welfare programmes, provide special education equipment and materials, special education training, special training and re-training of personnel to develop capacity building and to keep abreast of the latest teaching techniques for the various categories of disabilities,  the architectural design of school buildings must be disability-friendly so that the barriers to free access should be removed and school buildings should take into account the special needs of the handicapped, for example, ramps instead of steps, wider doors for wheel-chairs, and lower toilets should be provided as prescribed by the Nigerian National Policy on Education, 2004.

Olamide Animashaun is a 400 level student of the prestigious Faculty of Law, University of Lagos. She is currently the Public Relations Officer of the Law Students Society, Unilag. She has acquired a vast range of Model United Nations experience both regionally in countries like Ghana and Nigeria and internationally in States like Boston and Washington in the U.S.A. She loves and has experience in Publicity and Public Relations. She is intelligent and versatile. She has a deep passion for Charity and she is deeply committed to achieving the 2030 Sustainable Development Goals. Her article on tax has been featured on Lawyard and she is learning to become a better writer.

Big Data And The Right To Privacy In Nigeria

The AFCFTA: Getting to the Basics