This article critiques how Lord Taylor of Gosforth CJ, in R v Derby Magistrates’ Court; ex parte B, came to assign legal professional privilege an absoluteness from which there could be no derogation. Particular attention is paid to Balabel v Air India which stands in direct contrast to the judicial pronouncement formulated in Derby. Where Lord Taylor proclaimed that the privilege applied across the board, Balabel reveals a series of shifts in judicial thinking. Lord Taylor equally emphasised the importance of maintaining the exclusivity of legal professional privilege within the confines of the legal profession. His ruling in R v Umoh Mfongbong is relevant in this regard. Promoted as a necessary corollary of the relationship between lawyer and client, the ‘exclusivity rationale’ draws out the underlying assumptions with respect to the justifications for the rule and enhances the value of services which lawyers are uniquely qualified to offer. A more intricate discussion of the inconsistencies thwarting the privilege will be canvassed in Section II, where waiver and the crime-fraud exception are analysed. Judicial opinion has varied as to whether the legal profession should permit the privilege to be re-established upon protected communications being forfeited. The relevant question to ask is whether material affected by partial disclosure which is not misleading should retain its privileged character. This question was settled in Tanap Investments (UK) v Tozer on which Lord Taylor ruled. The judgment was strikingly different from Goldman v Hesper in which Lord Taylor allowed the rule to be invoked on a case-by-case basis according to specific purposes and contexts. The distinguishing feature of these cases is that waiver was effected only after the party’s conduct touched a certain point of disclosure, irrespective of the fact each had waived their right to invoke the privilege. Through tracing the judicial evolution of Lord Taylor’s reasoning, this article concludes that judicial uncertainty, arbitrariness and inconsistency have muddied a consistent application of the rule, with Derby illuminating what courts were prepared to put, or read into, the concept of legal professional privilege.

Calls for Amendment of the 1999 Constitution over the Death of a Candidate for an Election Preceding Conclusion of Polls in Nigeria: A Critique 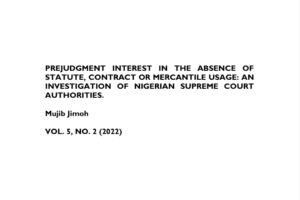 PREJUDGMENT INTEREST IN THE ABSENCE OF STATUTE, CONTRACT OR MERCANTILE USAGE: AN INVESTIGATION OF NIGERIAN SUPREME COURT AUTHORITIES. 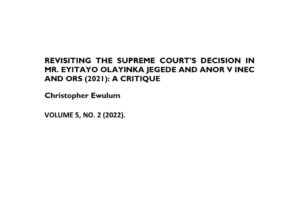 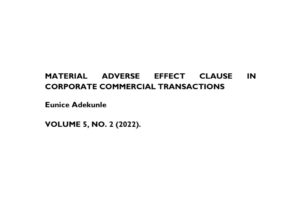