Company X is a leading Engineering, Procurement and Construction Company, headquartered in Ikoyi, Lagos. The firm is recruiting for Graduate Trainees – with preference for;

With the internet, job sites, newspapers/magazines and wall posters awash with discriminatory job adverts from companies like the above – the fate of the Nigerian graduate seems bleak. The reality is starker – the rate of unemployed people increased from 13.6 million to 18.0 million in the 3rd quarter of 2017 – and there is a general consensus that discriminatory job adverts make graduates unemployable. On the flipside – recruitment policies of companies like Company X are justified with a clichéd rhetoric – “organizations should be free to pursue recruitment policies which align with its visions and goals”.

The purpose of this article is therefore to contribute to agitations for the enactment of an anti-discrimination directive which prevents organizations from imposing discriminatory conditions in its job adverts and employment offers. It first sets out the relevant laws on employment in Nigeria and international treaties on same. It further highlights best practices from abroad and lessons which could be drawn from these. The resulting effect is to find – that a dynamic and vibrant economy must be predicated on nurturing talents that are competent, passionate and skilled irrespective of age, gender or academic achievements.

Employment laws in Nigeria can be said to be generally employer friendly. The reason for this is not far-fetched. It has become a norm for employers to impose discriminatory conditions on job applicants. The extant law on Labour and Employment in Nigeria – namely, the Labour Act of 2004; the Trade Union Amended Act 2005; the Employees Compensation Act 2010; the Factories Act 2004; the Pensions Reform Act 2004; and the Trade Disputes Act 2004 – provides little or no discrimination protection for job applicants and indeed employees.

The enforcement of these Statutes and regulations falls under the auspices of the National Industrial Court of Nigeria (NICN) and with regard to discrimination claims, there are no laws that specifically prohibit discrimination in the employment context. The only protection against discriminatory job requirements is provided in Section 42 of the Nigerian Constitution – which provides for freedom from discrimination on the basis of sex, age, ethnic group, and political affiliation – and the National Employment Policy (NEP), published by the Ministry of Labour and Employment. In its objective, the NEP purports that;

Objective 1: To promote equality of opportunity and treatment in access to employment

1.1 Job advertisement shall reflect the job description and the selection criteria shall principally be related to qualifications, skills, knowledge and experience.

1.2 Job advertisements shall not state any requirement related to sex, age, ethnicity, religion or other personal attributes except where such attribute are inherent requirements for the job.

Quite interestingly, the implementations of these are not far-reaching for obvious reasons – they are not extant laws relating specifically to discrimination of job adverts. The International Labour Organization’s Discrimination, to which Nigerian is a party – and which requires states to enable legislation which prohibits all discrimination and exclusion on any basis including of race or colour, sex, religion, and political opinions­– is eo ipso rendered non-effective.

There are several reasons companies and government parastatals impose restrictions. From saving recruitment cost, to streamlining number of applicants, to catching them younger, to meeting specific job gender demands – the list is inconclusive.

While these may be legitimate concerns, the Nigerian reality and global modern business practice renders them unjustifiable. With regards to the former, years of taking JAMB, incessant strikes by ASUU and higher institutions, and the fragmented curriculum makes it highly unlikely that a typical Nigerian graduate can meet the age and experience requirements. With the latter, the right to secure employment without any form of discrimination is now a universal right, protected and pursued in many developed societies, and quite rightly so, it aids the fight against unemployment and fosters economic productivity.

Nigeria is not the only country inundated with recruitment discriminations but more developed societies provide safeguards to ameliorate its effect. Firstly, in the US, under the laws enforced by Equal Employment Opportunity Commission (EEOC), it is illegal to discriminate against someone because of the person’s race, colour, religion, sex, and most importantly “age”. The Age Discrimination Employment Act (ADEA) enforces this and protects applicants/employees 40yrs and above from being discriminated against on the basis of age in hiring, promotion, discharge or compensation. If an employer is found in violation of these employment laws, he can be sued and fined.

Furthermore, under the U.K Equality Act 2010, there are express stipulations which prohibit discrimination, on the grounds of sex, marital status, age and any other term of employment. If it is not carefully worded and targeted, a job advert may be discriminating; Ryanair for instance, was successfully sued for age discrimination when it used the words ‘young and dynamic’ in a job advertisement. To enforce these provisions, the UK Employment Tribunal was established and ipso facto has the power to make awards to compensate victims of discrimination for the ‘injury to feelings’ and any ‘injury to health’ they have suffered.

The first recommendation is for the promulgation of a directive/law specifically against discriminatory recruitment practices across all level. Such directives and laws should be accompanied with guides, modelling the UK Commission for Employment and Skills’ Guides (UKCES) one of which is designed to encourage employers to prepare young people in education for the world of work. The guide provides for mandatory work experience for all 16-19yrs old by introducing traineeship (bridging education and employment). The onus will a fortiori be on employers – “if you want experience, give them one”.

Secondly, remedies should be included when fashioning out such directives/law; so that applicants can seek redress in the NICN as it applies in the UK. A new employment taskforce could be inaugurated to enforce these laws, with the NICN having jurisdiction over the cases. The utility of this is not far-fetched. Job advertisements will be targeted to a wide audience to ensure diversity of applicants. Also, employers will have to clearly identify the skills and competence is required to fulfil the role, and only these should form the basis of the advert.

If anything, the President was elected on the basis of competence and zeal for change, as against those that termed him too old and unhealthy.

Akorede Samuel Omotayo is a First Class LLB graduate of Bangor University, UK and a candidate of the Freshfields Stephen Lawrence Scholarship Scheme. He also holds a BA (Hons) in Philosophy, Ekiti State University, and is presently preparing for his Bar I due to start June 2018.
Tomiwa Babatunde is a final year Law student of the University of Lagos. He has a growing interest in Constitutional Law, Insurance and Property law. He is an active member of the Taslim Elias Student Chamber, and was Academic secretary in 2015. He recently interned at J.O Fabunmi & Co, and he relishes a career as an Insurance practitioner.

Things Fall Apart: Why Copyright Laws and Symbols are Fast Meaning Nothing in Today's Digital Age 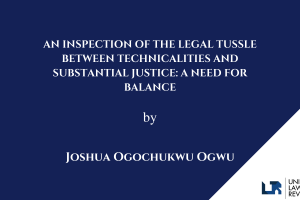 AN INSPECTION OF THE LEGAL TUSSLE BETWEEN TECHNICALITIES AND SUBSTANTIAL JUSTICE: A NEED FOR BALANCE 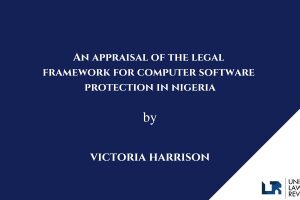