Human rights are rights inherent to all human beings, whatever our nationality, place of residence, sex, nationality or ethnic origin, colour, religion, language, or any other status. We are all equally entitled to our human rights without discrimination. These rights are all interrelated, interdependent and indivisible. In traditional African societies like Nigeria, culture has a pervasive influence on how women are treated. The 1999 Constitution of Nigeria prohibits discrimination on the grounds of gender, but customary and religious laws continue to restrict women’s rights. As Nigeria is a Federal Republic, each state has the authority to draft its own legislation. However, any law which is contradictory to the Federal Law or the Constitution can be challenged in a Federal Court and cannot subsist. The combination of federation and a tripartite system of civil, customary and religious law makes it very difficult to harmonize legislation and remove discriminatory measures.

Certain states in the North follow Islamic (Sharia) law, though not exclusively and only in instances where Muslims make use of Islamic courts. Adherence to Islamic law reinforces customs that are unfavorable to women, including those relating to freedom of movement, and to marriage and inheritance. 23 years after the ratification of CEDAW (Convention on Elimination of All Forms of Discrimination Against Women) by Nigeria, its provisions still remains a paper tiger and cannot be enforced in any Court in Nigeria, as a process of domestication must be undergone according to Section 12 of the 1999 Constitution, before it can become part of the nation’s municipal law. As of 2006, the Abolition of all Forms of Discrimination against Women in Nigeria and other Related Matters Bill’ was under consideration; and it is unclear whether this has been promulgated into law. However, it is without a doubt that Nigeria has ratified the Convention on the Elimination of All Forms of Discrimination against Women in 1985.

Nigeria is a multi-cultural nation with more than two hundred and fifty ethnic groups with different cultures. These ethnic groups have customs and traditions that determine succession. Judicial attitudes until recently tend to perpetuate gender discrimination. For example in Nezianya v Okagbue (1963) All N.L.R 358 the Court held that under the native law and custom of Onitsha, a widow’s possession of her deceased husband’s property is not that of a stranger, and however long it is, it is not adverse to her husband’s family and does not make her the owner. Thus, she cannot deal with his property without the consent of his family. Further, if a husband dies without a male issue, his real property descends to his family, and his female issue does not inherit it, according to custom. Also in the case of Nzekwu v Nzekwu (1989) NWLR (Pt.104) 373, the Supreme Court of Nigeria restated the principle that the widow’s dealings over her deceased husband’s property must receive the consent of the family, and she cannot claim the property as her own. She has, however, a right to occupy the building or part of it during her lifetime, but this is subject to her good behaviour. Subsequently, in the case of Onwuchekwa v Onwuchekwa (1991) 5 NWLR (Pt. 194) 739 the Court of Appeal refused to reject as repugnant, a custom in which a husband is said to own the wife along with her properties.

However, in Mojekwu v Mojekwu [1997] 7 N.W.L.R 283 the Court of Appeal Enugu held that the “Oli-ekpe” custom of Nnewi in Anambra State under which male children only inherit their father’s property is unconstitutional. Niki Tobi J.C.A delivering the lead judgment asked the following questions;

Is such a custom consistent with equity and fair play in an egalitarian society such as ours? Day after day; month after month and year after year, we hear of and read about customs, which discriminate against women in this country. They are regarded as inferior to the men. Why should it be so?

According to the learned Justice of the Court of Appeal:

‘All human beings – male and female – are born into a free world, and are expected to participate of freely, without any inhibition on grounds of sex; and that is constitutional. Any form of societal discrimination on ground of sex, apart from being unconstitutional is antithetical to a society built on the tenets of democracy, which we have freely chosen as a people. We need not travel all the way to Beijing to know that some of our customs, including the Nnewi “Oli-ekpe” custom are not consistent with our civilized world in which we all live today. In my humble view, it is the monopoly of God to determine the sex of a baby and not the parents. Accordingly, for a custom or customary law to discriminate against a particularly sex is to say the least an affront, I have no difficulty in holding that the “Oli-ekpe” custom of Nnewi, is repugnant to natural justice, equity and good consciences.’

Another recent case of Mojekwu v Ejikeme, (2000) 5 NWLR 402 the Court of Appeal held that a female child could inherit from the deceased father’s estate in Igbo land without the performance of the Nrachi ceremony. Nrachi is a ceremony in which a man keeps one of his daughters at home unmarried for the rest of her life to raise issues, especially males, to succeed him. After a daughter performs this rite, she takes the position of a man in her father’s house. Technically, she becomes a “man”. In that case, the court took liberty to interpret the constitutional nature of freedom from discrimination vis-à- vis the “ili-ekpe or Oli-ekpe custom of Nnewi that does not recognize female inheritance unless Nrachi ceremony has been performed on the female. The Court held that: by Section 42 (1) of the Constitutional of the Federal Republic of Nigeria, 1999 a citizen of Nigeria of a particular community, ethnic group, place of origin, sex, religion or political opinion shall not , by reason only that he is such a person, be subjected either expressly by, or in the practical application of, any law in force in Nigeria or any executive or administrative action of the government to disabilities or restrictions which citizens of Nigeria of other communities, ethnic groups, places of origin, sex, religious or political opinions are not made subject.

Consequently, the court held that such a customs clearly discriminated against the daughter of the deceased who did not perform the ceremony and is therefore unconstitutional in the light of the provisions of section 42 of the Constitution of the Federal Republic of Nigeria, 1999. The Court refused to apply the custom and declared it repugnant to natural justice, equity and good conscience in that it legalizes fornication and encouraged prostitution, as the women remains unmarried procreating outside the bounds of marriage.

In conclusion, it is recommended that in modern times and in the wake of human rights activism that the National Assembly domesticates the various Conventions against discrimination in order to make them enforceable in Nigeria and the Courts should refrain from enforcing any custom that is repugnant to natural justice even in a bid to balance the rights to freedom from discrimination and the right to culture and/or religion.

Damilola Obafemi is the current Vice-President of the Law Students Society, University of Lagos. She has an eclectic range of interests including Law of Taxation, Maritime Law and Alternative Dispute Resolution and hopes to one day travel the World and experience diverse cultures 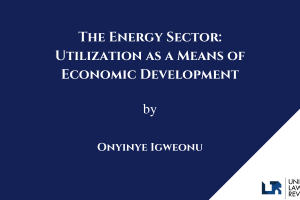 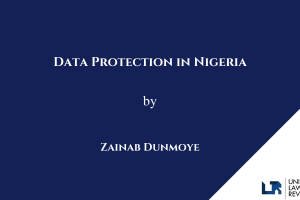